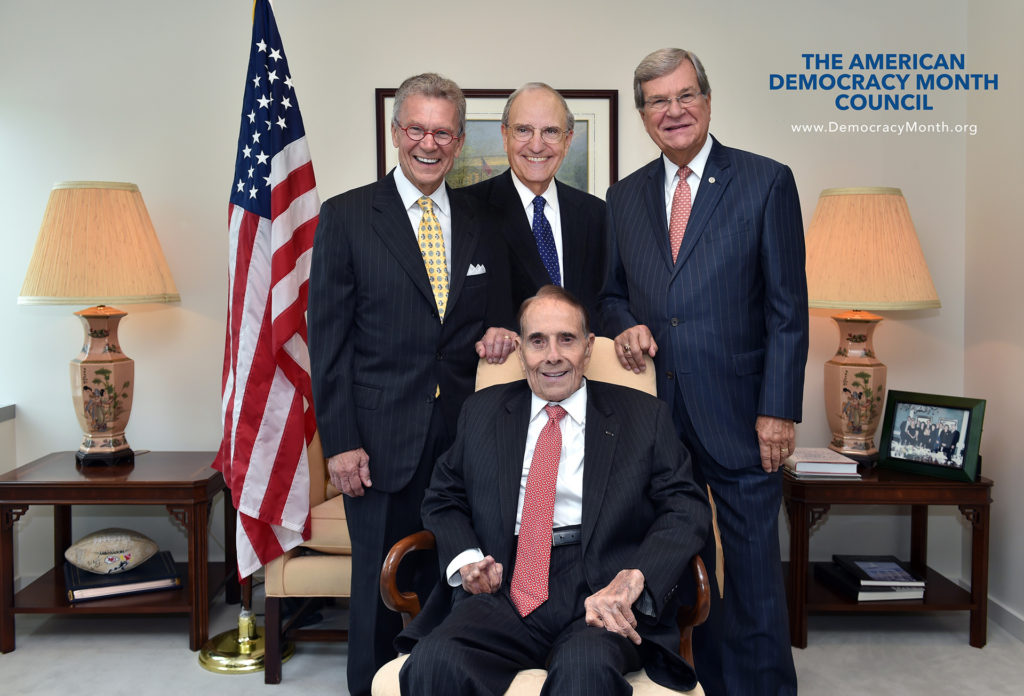 Political Icons reunite with a clear message: Preserve our Democracy, now is the time to act

U.S. Senate Creates “National Democracy Month” and Calls for a Re-emphasis on the Importance of Democracy to our Freedom and Way of Life

With the hope of halting waning support for democracy, a bipartisan group of political icons and former U.S. Senate Majority Leaders – Bob Dole, George Mitchell, Tom Daschle and Trent Lott– in their capacity with the American Democracy Month Council (ADMC) – successfully urged the U.S. Senate to pass legislation last night creating National Democracy Month for September 2018. This comes in response to repeated studies showing a critical loss of Americans’ faith in democracy. ADMC Founder Andy Manatos said, “The Senate’s legislation officially establishes that ‘the United States must once more teach and educate the people by taking appropriate actions to highlight and emphasize the importance of democratic principles and their essential role in our freedoms and way of life.’”

According to the highly regarded, international World Values Survey, living in a democracy is considered essential today by only 30% of our young people and less than a majority of those under the age of 60. In addition, 35% of well-to-do young Americans support army rule in America, a rise from 6% in 1995, according to the Journal of Democracy.

The legislation to create National Democracy Month was introduced, moved through the Senate and into law by Senate Judiciary Committee Chairman Chuck Grassley and Ranking Minority Member Dianne Feinstein joined by 23 Senators as co-sponsors— for a total of one-fourth of the US Senate.

With this official designation, the ADMC will begin implementing a number of programs to reeducate Americans about our democracy. It will work with NowThis (#1 social news publisher in the world) as an official partner of the ADMC. NowThis reaches over 70% of all U.S. young adults on a monthly basis, and averages more than 2.6 billion views each month with over 50 million social followers. This will be in addition to Senators and Members of the House, who have a total reach of an estimated 91 million social followers.

The Council is also establishing local democracy coalitions across the country, a major national lecture series, a national essay contest in schools, high profile democracy awards and Congressional hearings for an annual reassessment of support for democracy in America. The former Majority Leaders along with ADMC Founder’s Circle Chairman Dennis Mehiel, Founding Board Members John Negroponte, Manatos and others on ADMC boards, will help advise the ADMC programs.

Members of the Council believe it is essential that Americans become reeducated about the perilously fragile status of democracy. They believe that Americans must again understand academia’s consensus that democracy is the only form of government that produces freedom with any regularity. In addition, Americans must once more learn to value democracy even with all its frustrations. As the revered former British Prime Minister Winston Churchill said, “Democracy is the worst form of government except for all those other forms tried from time to time.”