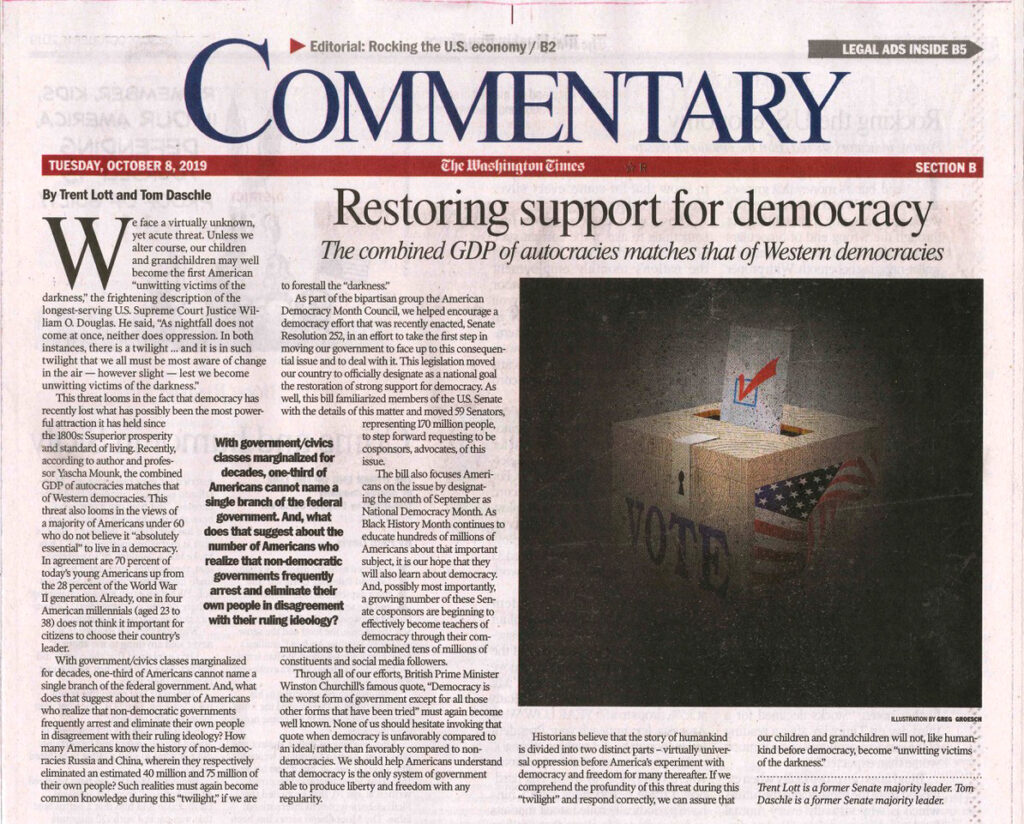 We face a virtually unknown, yet acute threat. Unless we alter course, our children and grandchildren may well become the first American “unwitting victims of the darkness,” the frightening description of the longest-serving U.S. Supreme Court Justice William O. Douglas. He said, “As nightfall does not come at once, neither does oppression. In both instances, there is a twilight … and it is in such twilight that we all must be most aware of change in the air — however slight — lest we become unwitting victims of the darkness.”

This threat looms in the fact that democracy has recently lost what has possibly been the most powerful attraction it has held since the 1800s: superior prosperity and standard of living. Recently, according to author and professor Yascha Mounk, the combined GDP of autocracies matches that of Western democracies. This threat also looms in the views of a majority of Americans under 60 who do not believe it “absolutely essential” to live in a democracy. In agreement are 70 percent of today’s young Americans up from the 28 percent of the World War II generation. Already, one in four American millennials (aged 23 to 38) does not think it important for citizens to choose their country’s leader.

With government/civics classes marginalized for decades, one-third of Americans cannot name a single branch of the federal government. And, what does that suggest about the number of Americans who realize that non-democratic governments frequently arrest and eliminate their own people in disagreement with their ruling ideology? How many Americans know the history of non-democracies Russia and China, wherein they respectively eliminated an estimated 40 million and 75 million of their own people? Such realities must again become common knowledge during this “twilight,” if we are to forestall the “darkness.”

As part of the bipartisan group the American Democracy Month Council, we helped encourage a democracy effort that was recently enacted, Senate Resolution 252, in an effort to take the first step in moving our government to face up to this consequential issue and to deal with it. This legislation moved our country to officially designate as a national goal the restoration of strong support for democracy. As well, this bill familiarized members of the U.S. Senate with the details of this matter and moved 59 Senators, representing 170 million people, to step forward requesting to be cosponsors, advocates, of this issue.

The bill also focuses Americans on the issue by designating the month of September as National Democracy Month. As Black History Month continues to educate hundreds of millions of Americans about that important subject, it is our hope that they will also learn about democracy. And, possibly most importantly, a growing number of these Senate cosponsors are beginning to effectively become teachers of democracy through their communications to their combined tens of millions of constituents and social media followers.